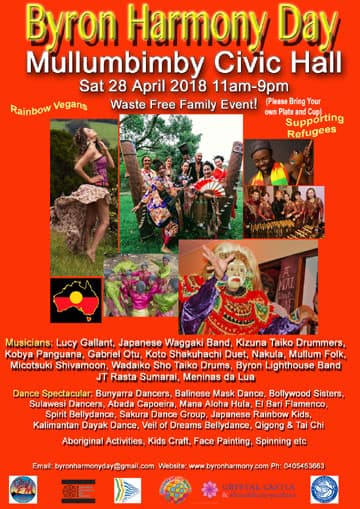 Why did the Harmony Festival move to Mullumbimby this year? What does Mullum have to offer to your event’s growth (ironically Spirit Festival just moved from Mullum to Byron and you’re doing the opposite!)
There are so many reasons why Byron Harmony Day has decided to move to Mullum this year. The Byron Harmony Festival is the only public event celebrating multiculturalism in Byron Shire so after 11 years in Byron we felt it was time to share the love with one of our other major Byron communities – here in Mullum. Mullumbimby is also home to some of our most inspiring schools and community groups such as Shearwater and Mullumbimby High plus Mullumbimby Neighbourhood Centre and Rainbow Vegans who are supporting Harmony Day this year. Byron Harmony Day is a FREE, non-profit, grassroots, community festival compared with the majority of festivals taking place around Byron which are privately-owned therefor we are free to relocate according to our philosophy of sharing. In this case we have always loved the spiritual atmosphere and vibe at Mullum Civic Hall, one of the most beloved venues of Byron Shire… and with Byron Spirit Fest moving to Byron it left an empty space we decided to fill in order to enjoy the beautiful relaxing energy that is generated in the lovely gardens there and to share the Byron Harmony love and amazing multicultural feel that is always created when we bring 150 ethnic and cultural artists to share their cultures with the community. The street life and atmosphere in Mullumbimby is community and local compared to Byron which is overwhelmed with tourism – leaving us residents in the minority. We don’t have a “business plan” or “growth” plan as we just want to create harmony and celebrate multiculturalism wherever we can- it was an intuitive decision more than anything and time for a refreshing change!

What is the guiding philosophy for Harmony Festival?
Equality and Sharing. Harmony Day is the national day for celebrating multiculturalism across Australia. Harmony Day is officially held on the International Day for the Elimination of Racial Discrimination and is celebrated in communities, schools and workplaces across Australia, often presented by Local Councils or Migrant Services. Here in Bryon Shire we noticed that there was no celebration of Harmony Day so we decided it was an event that really had to take place and 12 years later we are still going. The policy of Multiculturalism celebrates and recognises the value of cultural diversity and we feel it’s really important to stay strong in support of equality and anti-discrimination for all people everywhere.

How has the event grown?
Our event has grown along with the natural growth of our multicultural community, gradually expanding to include new ethnic communities. Many people are aware of new residents arriving in Bryon area and have noticed the Japanese community, Brazilian, Israeli, Thai and Filipino communities growing in numbers. So this year we have even more beautiful, traditional cultural performances from Japan, Thailand and Brazil than ever before … there has been a great flow-on effect from Harmony Day which inspired the creation of the Byron Wagakki Band last year. From there the Japanese community went on to create the first ever!  fabulous Japan Festival which was held in November 2017 and from there we have been blessed to have many new Japanese performers joining in for Harmony Day 2018 with 8 new Japanese groups joining our program for the day – especially the beautiful Sakura dance group in full traditional costume and makeup, Kizuna Taiko Group and Wadaiko Sho coming all the way from the Gold Coast.. Also don’t miss the exciting Brazilian Women’s drumming group Meninas da Lua as well as Abada Capoeira and Brazilian DJ Set.

What kind of engagement have you seen from the community?
Local Mullumbimby community groups and schools have been great in coming on board to help us launch our first event in Mullum. For example the Rainbow Vegans are sponsoring us as well as holding an animal rights awareness stall, Mullumbimby Neighbourhood Centre is providing the courtyard space and The Hub will be set up as a Green Room for the performers. St Vincent De Paul and Anglicare migrant workers will be sponsoring the event and also present the info stall on the day to promote their services.  The Japanese community has been a fantastic help in bringing lots of performances, stalls, food and activities, the Thai community are bringing adult and childrens’ dance groups all the way from the Gold Coast.

Why do you think the Harmony Festival is important?
I remember one day I was visiting the Sydney Art Gallery and there were a few men on soap boxes in the Domain – one was promoting an end to Sexual Harassment Law – so I stopped by to destroy his arguments …then the next bloke was handing out leaflets and promoting racist political groups like Reclaim Australia and One Nation. So I stopped by to have a chat with him, and asked him – “Why are you promoting racist groups? Are you a racist?” he told me he is from the southern suburbs and he was upset about the Chinese community “Taking over Hurstville”. So I said – “actually I am originally from Hurstville area and Hurstville shops were my local shops. I really like it that it’s like China Town there now because I really like being able to buy some of my favourite foods locally” … I chatted for a while then finally mentioned nonchalantly. “and also be the way my daughter is part Chinese … ” his jaw dropped to the floor : Really … is she really Chinese ..?” …”Yes she really is Chinese … ! “
Children are the most vulnerable members of society and the most frequent victims of bullying including racism – unconscious bias, subtle or not so subtle racism has devastating long term effects, even just going to school feeling different, being the only Asian kid in class – is hard to cope with on a daily basis … There is no doubt that in recent years racism has been growing in Australia and white supremacy is sitting in seats of power here in Australia and elsewhere – it’s up to every person who cares about equality to stand up against the influence of racism and support multicultural activities like Harmony Day.

What should we expect from this years’ event?
Lots of fun – a really amazing day of brilliant colourful music and dance! This year the program for Harmony Day will be bigger and more exciting than ever with many performing groups arriving in Mullum who have never performed with us before …such as Kizuna Taiko Drum group from the Gold Coast, Sakura Japanese dancers, stunning Thai dancers, new group Byron Lighthouse Band, an exciting new Mullum group called Mullum Folk as well as our incredible belly dance groups Veil of Dreams and Spirit Belly Dance and some of our usual highlights El Bari Flamenco, Gabriel Otu and Bollywood Sisters. This year for the first time we will be focussing on creating a Multicultural Market with all kinds of handcrafts, Food Trucks, clothes, healing sanctuary featuring Japanese Shiatsu and Thai massage plus new activities such as spinning, calligraphy and Aboriginal activities plus raffles and silent auction.

How can people get involved?
We are welcoming all the community to get involved in whatever ways you can such as performing, having a market stall or running a workshop, sharing their culture in the Living Library, volunteering or just coming along to support and enjoy the food, culture and fun – it will be a great school holiday activity for the kids and a wonderful way to support and celebrate Equality!

Byron Harmony Day celebrates in Mullum for the first time ever!!
When is the one day of the year that you will see 200 exciting multicultural performers on stage plus chefs cooking up an exquisite international cuisine all day and night in the name of harmony, inclusion, diversity and anti-racism? Byron Harmony Day! …. and more great news is – Byron Harmony Day is moving to Mullum! — into the heartland of the Byron Shire community in order to celebrate our vibrant multicultural community in the Shire’s most iconic venue Mullum Civic Hall and surrounding gardens.
This year will feature the most exciting and varied World Music and Dance presentation ever seen in the North Coast Region with over 30 groups and individual performers sharing and sweating out their traditions, love and heart-felt passion for diversity. For the first time Harmony Day will feature some fantastic visiting artists such as the awesome Kizuna Wadaiko and Wadaiko Sho groups (Taiko drums) and exquisite Sakura Japanese traditional dance group from the Gold Coast who will join the local Japanese community to present 8 varied groups of Japanese music and dance including Byron Wagakki Band, Koto Shakuhachi Duet, Japanese Rainbow Kids, JT Rasta Samurai (Japanese Reggae) and lots of gorgeous Japanese cuisine including the fave Shaved Ice !

The daytime program will start with the lovely meditative kirtan music of Micotsuki Shivamoon with Shivam on exquisite slide guitar, followed by Welcome to Country, Bunyarra Aboriginal Dancers and Official Opening by Mayor Simon Richardson. Followed by the Harmony Dance Spectacular including very beautiful belly dancing and Turkish Gypsy dances such as Veil of Dreams and Spirit Bellydance along with Bollywood Sisters, Mana Aloha Hula plus Thai community presenting gorgeous Thai dances by adult and children’s groups in full resplendent costumes. The hilarious Balinese Mask Dance and first ever Dayak Dance from Kalimantan will represent Indonesia along with Indonesian mie goreng, nasi campur along with fave recipes from Thailand such as Pad Thai! Africa will be represented by Free drumming workshop with Gabriel Happy Africa as well as trad/modern/funk/reggae African musician Kobya Panguana.
Head-lining the Evening Show will be a whole lot of woman power with songwriter Lucy Gallant (Blues Fest, Glastonbury Festival) plus the powerful, inspiring Meninas Da Lua – Brazilian women drummers led by the passionate voice of Priscilla as well as awesome Spanish-Indo Fusion Nakula!
Many local community groups will be sharing on the day such as the Rainbow Vegans with free cakes and snacks, Refugee fundraising stall and more! Byron Harmony Day will be a great event to top off school holiday fun for the kids with great activities throughout the day such as Aboriginal activities, spinning, drumming, dancing, face painting, juggling, crafts and heaps of kids’ groups on stage! This event is supported by Byron Shire Council to be waste -free so please bring your plates and cups and washing up station will be available! For more info or stall booking phone Judy 0405463663