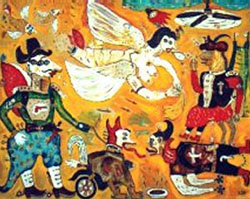 Inspirasi Indonesian Arts Festival Opening Night was a beautiful and significant occasion with special guests Mr Greg Vickery Hon. Consul of the Republic of Indonesia in Qld and Mrs Sally Vickery attending. Mr Vickery gave a very positive and inspiring Opening Speech for the Festival.
Special thanks are due to Ibu Vera Kos from the Indonesia Dance Group Gold Coast for the exquisite Fashion Parade of Indonesian costumes presented by our beautiful children. This was absolutely gorgeous and highly praised by all attending. We are also grateful for the wonderful Jaipongan and Kecapi Suling performances by Obek Junaedi from Sydney assisted by Jaemmy Basirudin. Many Thanks also to Ibu Nina, Mimin and Anita for presenting a fabulous Indonesian Feast.
The Film Festival was also wonderfully received – extra special thanks to Sue Piper from Wot Cross Cultural Synergy and Faiza Mardzoeki from Indonesian Corner as well as the National Film Video Lending Service – Screensound.
Showcasing an eclectic range of short and feature length films, a diverse view of Indonesia was presented with movies representing contemporary and traditional themes and attitudes. The beautiful Legong a classic tale of unrequited love filmed in Bali in the 1930’s was a highlight and was re-screened due to popular demand. In contrast, there were short art films by young Indonesians exploring issues of modernity, of these, Through the Kebaya, a series of reflections on the place of traditional costume in youth culture displays the changing face of Indonesia.
Particularly poignant was Rebuilding Our Lives, a glimpse into the emotional and physical recovery of the people from Banda Aceh. The film centres on the dignity and tenacity of the survivors of the tsunami rather than focusing on the immensity of the destruction. Providing comedic relief was Breadwinner, a quirky film by local Indonesian identity Tjintana Matahari.
Due to time contraints the program screened on the night was unfortunatley not able to include all films originally selected. Many thanks to the generosity of the amazing directors and film organisations who allowed us to screen their films:
Ketok: Tintin Wulia
Rebuilding Our Lives: Konfiden
3022984: Johan Marais-Piper
Breadwinner: Tjintana Matahari
Reading the Kebaya: Victoria Cattoni
Legong: Henry De La Falaise
Many thanks also to Bendera (The Flag) by Nan Achnas and And The Moon Dances by Garin Nugoroho which we had also planned to include. Our sincere and deep apologies to the audience and the directors for running out of time due to technical difficulties.
Kirana Talip opened the superb photographic exhibition – Portraits of Love which she photographed, coordinated and curated with the help of photographers Dale Roberts, Fiona Blandford and Zen Player. The show was then on display at the Byron Cinemas until 16 July. This exhibition is an absolutely exquisite and poignant expression of love between Australia and Indonesia through our children – portraits of the children of the Australian Indonesian community in Byron and Ubud. Many thanks to the families who allowed themselves to be photographed – this exhibition is available to tour. Please contact Kirana 02 66 857258
Many thanks also to AIAA National President Malia Ritaningsih and AIAA National Secretary Cynthia Webb for attending the opening and of course to AIAA NSW Nth Coast Branch President Dharma Bradridge, Coordinators Judy Shelley, Dee Tipping, Kerry Greedy and Kim Mitchell as well as the Work For the Dole Team for working so hard to make this dream come true.

Some of the Events

There’s no argument that one of the highlights of the Inspirasi Festival was Heri Dono’s shadow puppet workshops and his performance at the Finale.
Heri arrived in Byron Bay in early July in time to be a major speaker at the FEHVA – 48 Hours of Visual Arts Festival and then spent the follwing two weeks working in an open studio assisted by local artists such as Ginny Jones, Kathy McCormick, Made Siki Astawa and John Lewis, as well as visiting dalang Mike Burns. Many local community members, including children and Indonesian friends helped create the puppets and staging of the performance. Many thanks to Byron Tik at the Byron Arts Factory Gallery for allowing Heri and the many friends who helped with the project to utilize the Gallery/Studio during that time.
Vocalist Naomi Liba travelled from Melbourne in order to work with Heri and worked closely together with Mike, Efen Jaenudin, Tim Shanasy, Dharma Bradridge and other members of the Byron Salendro Gamelan to create the beautiful music which accompanied the story of Dewa Ruci performed as the finale of the festival at Byron Peace Pole Park on Sunday 17 July, 2005. The story was performed in Indonesian and English by Heri and Mike.
Heri’s visit to Australia was made possible by the Australia Indonesia Institute. Thanks also to the Lismore Lantern Festival for the loan of the dragon and screens.
The following photos were taken over the period of the festival by Ginny Jones, Chris Coles and Tom Doyle.