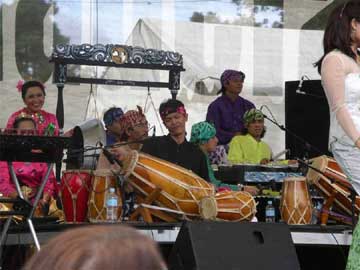 Cynthia Webb, Gold Coast.
SambaSunda have made their first visit Down Under, having been honoured with an invitation to perform at WOMAD (World of Music Art and Dance) in Adelaide, Australia, (March 10/11) and WOMAD, New Plymouth, New Zealand, (March 16 through 18).
WOMAD is a worldwide series of festivals featuring international music. There about seven WOMAD festivals each year, held in different world locations.
The name “SambaSunda” has multiple meanings. In the old language of Cirebon, West Java, samba means youthful/energetic, and it also is the more well-known dance rhythm of Brazil. Sunda is of course the name of their ethnic group and the West Javanese location of their home.
This is a large group, which fills the stage with a variety of traditional instruments, and so touring is a complex business, with their large quantity of unique Sundanese instruments, traditional drums, flutes, string instruments and various gongs. They are based in Bandung, which has a vibrant music scene, and many of the members are graduates of STSI, (Sekolah Tinggi Seni Indonesia), the arts university.
Their debut tour of Europe in 2003, and another in autumn 2005 were very successful because of their extraordinary musicianship and their high-energy performance style. SambaSunda have marketed their music in Europe and the UK, as well as Indonesia.
Efiq Zulfiqar, composer and another multi-instrumentalist, who currently lives in Brisbane, Australia, is one of the original members of SambaSunda and joined them on tour in the Antipodes. He is very active in local musical activities; in past years he participated in SambaSunda’s tours of Europe, the UK, Taiwan, and Malaysia.
He explained that SambaSunda began as the brainchild of multi-instrumentalist Ismet Ruchimat, who graduated in Surakarta and became a lecturer at STSI, Bandung. Ismet started his career in 1989 with the Jugala Orchestra and has also had collaborations with international musicians. Efiq met Ismet when he was a student, studying Degung and Karawitan (traditional Javanese and Sundanese musical forms). The group started out with seven members, and made its first recording in 1993.
At WOMAD New Zealand, the founder of SambaSunda, Ismet Ruchimat said: “Our concept now is that we want to be a part of the musical evolution of Indonesia. In the past we have brought in other musical influences — reggae, African, and South American — at the suggestion the Indonesian recording company we were with at the time.”
SambaSunda is now with a German Record Label, Network, which supports their wish to be an authentic voice of Sunda.
“Our newest album Rahwana’s Cry contains our musical ideals, the pure soul of Sundanese voice and sources,” said Efiq, while awaiting the arrival of his compatriots in Brisbane, where he joined the tour.
Later in the year he will rejoin them in Bandung for some more creative work together.
Ismet Ruchimat said this was the group’s third WOMAD appearance, after Reading, the UK, a few years ago, and then Adelaide, the previous weekend.
When he was asked about his impression of WOMAD New Zealand. “It’s a great festival. So many people come and it’s a beautiful setting in the park. It’s so important for SambaSunda to perform in other countries, share our music and hear other world musicians, too. In our country we do not have international festivals like this, only local ones, and we should have them,” he said.
Ismet continued: “When we return to Indonesia I plan to create a music school and to invite foreign musicians to Indonesia to study and play music with us.
“We also want to do a road tour, going to schools and universities to do workshops with students. Our music is quite well-known among Indonesian university students.
“We have brought back documentation of traditional music from our tours of China, Taiwan, Singapore, Malaysia, Europe and the UK, to share with them.”
At WOMADelaide, one of the group’s performances was in searing 38-degree heat, whereas in New Zealand their first performance at 7 p.m. took place during a downpour of rain, which did not in any way dampen the enthusiasm of the musicians or their large audience in beautiful Pukekura Park, central New Plymouth.
Their second WOMAD NZ performance was at 4 p.m. in bright sunshine and the Kiwi audience loved it. There was rampak (drumming — always popular with the dancing crowd), plus gongs, sounds of the bonang and saron (gamelan instruments), violin, kecapi, guitars and suling. Sundanese musical themes soared out over the bowl-shaped lawn, which descends towards a small lake in front of the stage of the Bowl of Brooklands. There were songs sung by Rita Tila and Ella Nurlaela, and also Sundanese dancing, from Mira and Ismet Ruchimat’s wife, Ati.
The group’s March 2007 tour of Australia and New Zealand has been a long-term dream of the Byron Bay-based not-for-profit cultural organization, Australia Indonesia Arts Alliance (AIAA).