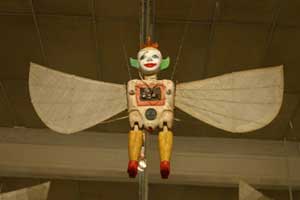 ANGELS: BANG! BANG! – held at Sherman Galleries Sydney 12 Oct – 3 Nov 07
From www.shermangalleries.com.au
Where angels tremble
Angels can fly because they take themselves lightly.
G. K. Chesterton, Orthodoxy, 1908
In conversation with Heri Dono some years ago, Indonesian writer W. S. Rendra explained that “artists live somewhere between earth and sky”.1 This statement may be read metaphorically or literally, given the recent proliferation of artists’ travel between constellations of international biennales. As one of the most invited of these global nomads, Dono spends a large proportion of time in the troposphere, working and reflecting, while flying between his home base of Yogyakarta and numerous destinations across the planet.
Until recent awareness of global warming, the heavens of secular western culture were largely unoccupied by artists’ imaginations – an ironic situation, since at least a decade of theoretical literature has been devoted to notions of fluidity and mobility as paradigms for contemporary culture.2 Dono’s oeuvre, however, is thronged with aerial references and, far from being a void, air and its inhabitants constitute a dynamic domain, teeming with ambiguity.
Paradoxically, this belief is deeply rooted in ancient Javanese animism, where a parallel universe of shadows and supernaturalism intersects with everyday reality. Successive waves of religions have augmented these numinous and numerous spirits with new deities and denizens of the air so that ‘dualism, paradox and ambiguity’ continue to suffuse Indonesian culture. Dono explains that here, ‘humanity lives in an animated cartoon world’ exemplified by the wayang puppet plays that integrate classical mythology with earthy humour and contemporary political allusion.
As an accomplished dalang (wayang master) and dancer, the artist embraces a number of interdisciplinary practices, including visual art and performance, as well as folk narrative and craft, thereby grounding his work while simultaneously navigating the ether around him. Dono’s airspace conjures up angels, winged horses, funky aeroplanes, gods and garuda birds that incessantly transport , and transform objects, artists, gods and the occasional elixir of creativity. Nevertheless, the artist does not take himself too seriously and remains down to earth; his paintings, performances and installations may invoke mystical dimensions but they humorously debunk the mire and muck of human cupidity and stupidity, particularly in local politics.
Of his exotic fabulary, it has been angels that Dono continually revisits and reinvents, sometimes refashioning them in response to specific socio-political situations on terra firma. In this way a host of angels grouped into distinctive regiments has emerged to confront, delight and discombobulate old and new audiences alike. For this artist, angels represent the freedom to dream and imagine but, given his Javanese cultural heritage, they tend to be more commonplace than consecrated and ‘other worldly’. These are not the angels consigned to Christian religious art, those ineffable seraphim and pudgy cherabim decorating baroque basilicas and bedrooms, or the avenging angels of Biblical retribution. Nor do they inhabit the domains of sentimentality so popular with today’s fairy fanciers and doll collectors. Or then again, do they? These swarming creatures are provocatively ambiguous; as angel-puppet-automaton-doll-devils, they hover in art space, maniacally transgressing conventional hierarchies of popular culture, art and hobby craft.
Dono’s series of installations, Flying Angels, Angels Face to the Future and The Broken Angels, directly reference wayang golek puppets but their hybrid mechanics also evoke Flash Gordon cartoons with dodgy-looking electronic circuit boards embedded in their chests or backs. Emitting twittering insect noises, the recycled components raise and lower the (female) angels’ tiny peni and their large, flappable, gossamer wings. Amusing and gender confusing this may be, but these creatures can also wreak havoc. Like Lucifer, whose spectacular fall from heaven created the satanic armies of hell, a fluttering Dono angel can, in an instant, create a blazing paradise lost, depending on electrical voltage differences throughout the world.
While visually appealing, these squads of angels nevertheless suggest the powerlessness of ‘little people’ (orang kecil) who dangle, suspended, at the whim of bureaucracy and militarism. Defiantly impudent, however, they are not entirely victims. Their innocence is repeatedly undermined by grotesque humour in The Broken Angels, where inscrutable, clown-like faces and demonic horns, combined with red genitalia and matching booties, manage to bedevil any preconceptions of purity we may entertain. As another title suggests, Angels Face to the Future assume a horizontal flight pattern and, like their creator, are always ready for take-off. Who can tell if their mission will be beneficial or destructive? After all, their limbless bodies resemble airborne weapons in disguise.
George Bernard Shaw once tried to demystify these mythic winged creatures, noting that [i]n heaven an angel is nobody in particular.3 Because Dono’s heavenly hybrids oscillate between celestial and terrestrial spheres, between the ineffable and the banal, they are anything but virtuous or anonymous. In their absurd humour and menace, as well as their capacity for imaginative transformation, they remind us that anything can fly in this cosmology, perhaps even the artist.
Pamela Zeplin
Dr Pamela Zeplin is a writer and artist based in Adelaide. She is Senior Lecturer and Head of Art and Design History and Theory at The South Australian School of Art, University of South Australia.
(1) Heri Dono, conversation with the author, Adelaide, 11 April 2007.
(2) Justus van der Kroef, Javanese messianic expectations: their origin and cultural context, Comparative Studies in Society and History, vol. 1, no. 4, June 1959, p. 300.
(3) George Bernard Shaw, Maxims for revolutionists, Man and Superman (1903), in D. H. Lawrence (ed.), Penguin, London, 1946, reprinted 1981.