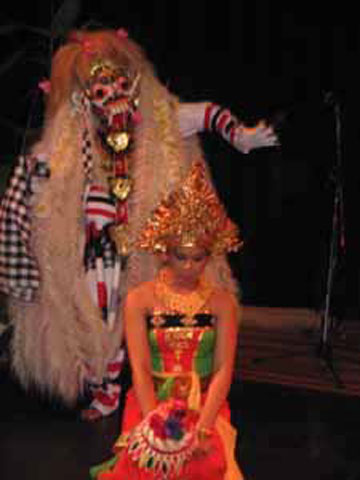 The inaugural Byron Harmony Day held on 15 March 2008 was a resounding success for AIAA and the Byron community. The activities held in Railway Park and in the Byron Community Cultural Centre involved a very wide representation of the various multicultural communities that live in Byron Shire.
Activities commenced at 12 Noon in Railway Park with Welcome to Country presented by Nigel Stewart of the Arawakal people followed by the Official Welcome by the Mayor Jan Barham. Events in the park played host to thousands of people throughout the day with various cultural performances and participatory events which catered to all age groups and families.
Following on from the lunch time multicultural food fair, the major concert commenced at 3pm in the Community Theatre – these varied and high standard performances entertained the audience throughout the afternoon and evening until 11.30pm.

The multicultural exposure and content of the entire day was enthusiastically embraced by the community at both Railway Park and the Community Centre, with enormously positive community feed back for all aspects of the Harmony Day celebrations. People who attended and participated were overwhelming in their praise and appreciation for the holding of the Byron Harmony Day event.
Media exposure further extended the coverage of the event throughout the following week sharing awareness of Harmony Day and its purpose throughout the wider community.

Purpose of the Project

The project fulfilled its purpose to coordinate and present a Harmony Day Celebration in Byron Shire incorporating performances, displays and other activities which celebrated the cultural diversity of our community.

The social and cultural benefit of celebrating Byron Harmony Day was that it supported and reflected positive community attitudes. Tolerance and recognition of the positive nature of cultural diversity is an important part of ensuring continued harmony within the community. Byron Harmony Day celebrated our own community harmony between peoples of all kinds living together – harmony in diversity.
The event involved the participation of about 300 performers, volunteers and workshop leaders and attracted an audience of between 1000 – 2000, including children, families and elderly people who enjoyed and participated in interactive activities and events such as the Living Library, Circle dances and kids activities.
Byron Harmony Day 2008 involved people from many disadvantaged groups such as mentally and physically disabled, elderly, homeless, sole parents as well as of over 20 CALD groups including Indigenous, Latin American, Chinese, Japanese, Maori, Dutch, French, Brazilian, Islander, Indonesian, Indian, Irish, Middle Eastern, Thai, Celtic, Scottish, Turkish, African and Spanish.
The whole community of Byron Shire benefited from Byron Harmony Day 2008, as while not all community members attended the event, the promotion and media coverage such as radio, print media and the Byron Harmony Day website www.myspace.com/byronharmonyday shared the benefits and awareness of Harmony Day widely throughout the Shire.
Harmony Day celebrations took place in 3 main venues in central Byron Bay which allowed for maximum public exposure and community access.

Byron Harmony Day was coordinated by AIAA who initiated a community team which met weekly during the months prior to Harmony Day. All indigenous and ethnic groups and individuals within Byron Shire community were invited to participate. The meetings were announced on Bay FM Community Radio weekly for six months and in the Byron Echo and Byron News over several months. The promotion was successful in attracting the attendance of people of many cultural backgrounds including Japanese, Indonesian, Kenyan, Ghanaian, Nigerian, Mexican, Spanish, Indigenous, Greek, French, Italian, Irish, Croation, Brazilian, Anglo-Aust etc
The Team also sought community sponsors for meetings, gatherings and community consultations – these meetings served to bring together a wide and diverse group of CALD groups in the lead up to Harmony Day. This created a great sense of belonging and provided for continuous creative input into the planning and content of the day.
Members of the Team also attended other local multicultural gatherings such as the Rainbow Club, English Language classes and Mullumbimby multicultural lunch in order to invite participation and include the broadest possible range of community input. As can be seen from the attached program the community input was diverse, broad ranging and socially inclusive.
The experience of community consultation resulted in cross-fertilization of ideas, collaboration and creation of a harmonious working community team, which hadn’t existed before the project was undertaken. Community Leaders who attended the Harmony Day meetings took back the information to share with their communities, which resulted in an enormous turn out on the day.
Planning meetings and community gatherings enabled the development of greater understanding and inclusiveness of people of all backgrounds, as well as capacity building and community development.