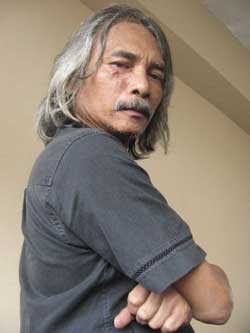 In February this year Sapto Raharjo, the dynamic director of the Yogyakarta Gamelan Festival, was busy finalizing the festival program – from his hospital bed where he was suffering the effects of appendicitis, cirrhosis of the liver and exhaustion. Unfortunately on 27 February he lost the struggle and passed away aged 54 – a great loss, to his family and the many others who knew and loved him as a friend.
Sapto Raharjo’s interest in traditional Javanese performance was sparked when, aged 8, he joined the Arena Budaya Yogyakarta. There he began to learn the gamelan and master its melodies. His conviction that music was his field and gamelan his instruments was fostered through his studies with gamelan maestro Ki Cokro Warsito. Further studies at the Academy for Art, Drama and Film (ASDRAFI) deepened his understanding. However, Sapto’s learning was not just limited to academic circles. He read widely and had a large circle of friends in academia and the arts – both inside and outside Indonesia.
Sapto Raharjo was a composer and musician, writer and teacher, broadcaster and event organizer.  He was a member of the Association of Indonesian Composers and of the Indonesian Radio Broadcasters Commission.  Central to all this was his enduring love of contemporary gamelan. He formed the group Dampit to perform contemporary gamelan compositions and began to attract public acclaim with performances such as ‘Musik Kaleng’ (Can Music), ‘Yogya Harmony 78’ and a 3-day non-stop Yogyakarta performance.  Another notable performance was ‘Gamelan Meets Synthesizer Meets Art Rock’ in Yogyakarta, 1986 and Jakarta, 1987. As these concerts signaled, Sapto had a sharp ear and creative imagination, combining different musical styles and even found objects such as cans with traditional Javanese instruments processed through the computer to produce intriguing contemporary compositions.
His albums include ‘Borobudur Suite’, ‘Java’, plus ‘Merapi’ and ‘Katak-katak Bertanggo’ in collaboration with French vibraphonist Alex Grillo. In fact Sapto, described by UNESCO as ‘an active electro-acoustic artist who works with computer and traditional gamelan sounds’ has collaborated with musicians from many countries , including musician Prof Dieter Mack with whom he led workshops in Yogyakarta in 1988. Sapto taught gamelan in France, the Netherlands and from 2006 for three months each year in the United States.
Sapto was also a programmer and presenter of a weekly world music show at Radio Geronimo Yogyakarta, popular with its largely university student listeners. In 1996 his keen interest in promoting Indonesia’s rich and varied musical heritage led to his involvement in a national project which compiled over 30 programs of ethnic music and distributed tapes of them, along with explanatory notes, to 52 radio stations. The project was supported by the Ford Foundation and Radio France Internationale (RFI). The project offered a wealth of new programming material and insights into traditional music to share with millions of enthusiastic listeners. Sapto was keen to reach the ears of his university student audience, as “the cultural knowledge they carry away with them when they leave their studies here is important for the future of our country.”
But perhaps Sapto is best known and loved for his role as Director of the Yogyakarta Gamelan Festival, which he founded with colleagues and has led since 1995. The festival has helped raise and sustain the profile of gamelan music, and other traditional Indonesian musics, with performers invited from all over Indonesia and in fact the world. Australian-Indonesian music ensembles that have appeared here include GengGong, Trio Madois, Warogus and the choir Voices from the Vacant Lot. The inclusion of the vocal ensemble surprised even me as leader of the choir’s tour to Indonesia in 2002. But it was typical of the open, inclusive and rich cross-fertilization nature of the festival. Voices sang a set of world music songs and were followed on stage by the Acehnese percussion ensemble Nyawoung. It was a perfect meeting of genres for both performers and audience alike.
The Yogyakarta Gamelan Festival has been hit hard by Sapto’s untimely death. But the 14th festival, that he was planning from his hospital bed, is to proceed – a fitting tribute to this contemporary gamelan maestro and his mission to introduce gamelan to the world. The website http://gayam16.net will soon announce this year’s program. So if you happen to be in Yogyakarta between 16 and 18 July visit the festival and join in the celebration of a passionate lifetime commitment.  Selamat jalan Sap.
by Sizan Piper AIAA National Board/Wot Cross Cultural Synergy