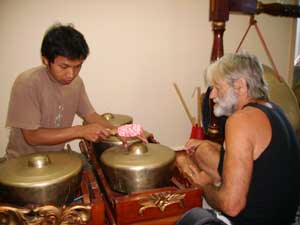 Many thanks and appreciation to Efen Jaenudin for visiting Byron Bay as Musician-in-Residence for a short period during November 2007. Local gamelan groups : Gamelan Langen Sari, Byron Salendro Gamelan and Nakula were very happy to have the opportunity to be inspired and assisted by Efen. Langen Sari were particularly pleased that Efen, also an experienced instrument-maker was able to tune their bamboo flutes (sulings) to play in harmony with their new degung gamelan. Efen’s visit to Byron Shire was made possible with a grant through Regional Arts NSW.
Efen was invited to visit Australia to perform in an exciting new theatre production which was presented as part of the OzAsia Festival at Adelaide Festival Centre during September 2007.
Eyes of Marege was created as a joint project by the Australian Performance Exchange and Teater Kita Makassar. For the first time in Australia, this unique combination of artists created a hybrid bilingual performance blending the haunting sounds of Sulawesian songs of the sea, with contemporary indigenous dance, comic physical theatre and Makassan ritual.
This is the extraordinary story of a young Indigenous man’s journey to Makassar at the turn of the 20th century. Eyes of Marege brought together artists from Sulawesi’s top contemporary theatre company, Teater Kita Makassar and some of Australia’s most dynamic Indigenous performers, including Djakapurra Munyarryun (Bangarra Dance Theatre). This theatrical collaboration celebrated the 400 year history of trade between the people of Northeast Arnhem Land and the Makassan trepang traders of Sulawesi.
In the 1900s, on an island off Northeast Arnhem Land, an Indigenous man, Birramen, and a Makassan fisherman fight over the theft of a sacred indigenous object. The fisherman is killed in the fight and Birramen’s friend Ahmad saves him from the revenge of the other fisherman. But Birramen must sail to Makassar to be tried in court for the murder. He finds himself mesmerised by the sights, sounds and culture of this southern Sulawesi city. After five years’ imprisonment and marriage to a Makassan woman, Birramen voyages home, dressed ‘like a sultan in woven sarong and silver bangle’ and profoundly enriched by his experience of the culture and peoples of this vibrant sea-faring city.
Shortlisted for the prestigious Patrick White Award, Eyes of Marege draws on a tradition of cultural exchange that goes back hundreds of years. It is a powerful story of love, death and the meeting of Islam with indigenous heritage.
from www.ozasiafestival.com.au